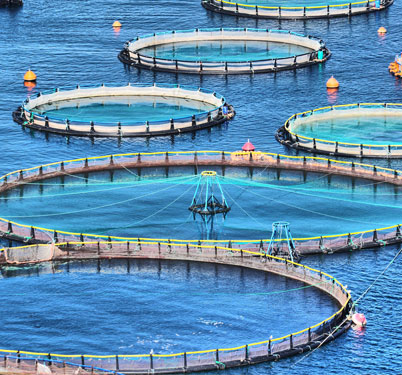 Fish Farms Market Overview in Indonesia
Fish farming is the world’s fastest growing food production sector. By 2018, more seafood will be farmed than caught from the wild. Actually, almost half of seafood found on grocer’s shelves comes from farms. If fish is responsibly farmed, adverse environmental and social impacts are minimized. It is the same situation in Indonesia. Indonesia plays an important role in global aquaculture industry. According to a canonical report named “Top 10 Fishing Nations Worldwide (in metric tons)” in 2012, this statistic in this report shows the world’s leading fishing nations in 2012, based on capture production. Indonesia caught about 5.8 million metric tons of fish in that year, which makes it the second largest fishing nations in the world behind China. Fishery exports increased strongly in recent years, with most shipments going to the US and Japan, followed by the EU. East Java as the country’s foremost production area accounts for roughly a third of shipments. Shrimp dominates the country’s exports, followed by frozen fish and fresh fish. 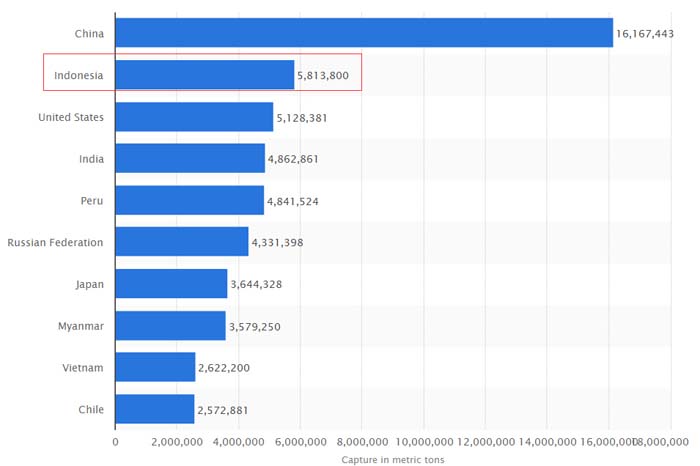 The combination of domestic demand and export potential points to business opportunities for fish, shellfish and seaweed producers operating out of Indonesia, as well as for processing companies and suppliers of fish meal equipment, such as fish meal extruder and fish feed pellets dryer.
Worldwide, the most important fish species used in fish farming are carp, salmon, tilapia and catfish. In Indonesia, fish species raised by fish farms also include salmon, catfish, tilapia, cod and others. Taking tilapia for example, Tilapia are hardy, fast growing, warm-water fish that are a popular choice for aquaculture. Tilapia production is booming worldwide, having increased from 1.6 metric tons in 1999 to 3.5 metric tons in 2008. Indonesia are the third largest producer of Tilapia, behind China and Bangladesh. Besides that, in 2012, Tilapia from Indonesia is the first farmed fish to meet the ASC’s certification standard.
Reasons Why Fishery Industry Develops Fast in Indonesia 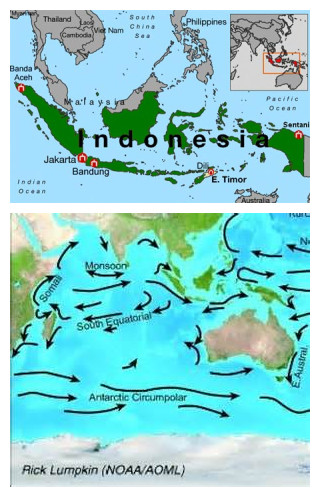 1.Geography
Indonesia locates between the Pacific and Indian Ocean, across broad sea area. With a territorial sea and exclusive economic zone area of 2.7 million square kilometers, ranking third in the world. Besides, it is tropical rain forest climate in Indonesia, with features of hot and rainy, which is suitable for tropical marine biology living. Fish grow rapidly and mature early, with short life cycle and long spawning season. Thus, Indonesia has favorable condition for fish growth and artificial fecundation. Indonesia lies in one of the most geologically active and populated area of ocean currents, the movement of which brings plenty of bait fish, and provides a good ecological environment for all kinds of fish, forming three world-famous major fishing grounds-Indian Ocean, claws and the eastern sea.
2.Government Policy
Indonesia government is looking to the seafood sector to bolster national food security and ensure sufficient protein intake by increasing fish in Indonesians’ diet, so more emphasis is being given to the promotion of fish and fish products as essential elements of the Indonesian diet, and providers of high quality protein. In May 2014, the Ministry of Marine Affairs and Fisheries of Indonesia and Wageningen University and Research center, started a 3 year project to enhance the availability and accessibility of safe and quality fish and fish products for the Indonesian consumers.The project is also supporting Small and Medium Enterprises (SME) in innovative fish product design. Improvements have been made in handling practices of fishermen, traders and auctioneers, and enhancing aquaculture practices of small scale fish farmers to improve the viability and profitability of fish farms.
3.Living habits
In Indonesia, annual per-capita consumption of fishery produce amounted to 33.8 kg in 2012 after rising rapidly over the preceding decade. Jakarta has proclaimed a “Blue Revolution”, an initiative launched in 2010 with the aim of boosting sales to global markets. Meanwhile, major exporting countries like Norway and Canada are striving to increase sales to Indonesia, though at a total of $412 million in 2012, Indonesian imports are only a fraction of its exports.
Fish Farm Types in Indonesian
Most of global aquaculture production comes from small- and medium-sized fish farms, essentially in Asia which contributes 92% of the total world aquaculture production volume. There are a number of different fish species that are raised on fish farms, the most common fish species raised are salmon, carp, tilapia, catfish and cod. In Indonesian, there are different types of fish farms that utilize different aquaculture methods.
Integrated Recycling Systems
It is considered the largest scale method of “pure” fish farming. Large plastic tanks are used in such system, and they are placed inside a greenhouse. There are hydroponic beds being placed near the plastic tanks. The water in the plastic tanks is circulated to the hydroponic beds, where the fish meal waste goes to provide nutrients to the plant crops that are grown in the hydroponic beds. The majority of types of plants that are grown in the hydroponic beds are herbs such as parsley and basil.
Cage System
This method utilizes cages which are placed in oceans, lakes or ponds that contain the fish. It is widely is also widely referred to as off-shore cultivation. Fish, which are kept in the cages, are fed and harvested artificially. With years of advancement, cage system reduces diseases and environmental concerns.
Composite Fish Culture
This is a type of fish farming that allows both local fish species and imported fish species to coexist in the same pond. The number of species depends, but it is sometimes upwards of six fish species in a single pond. The fish species are always carefully chosen to ensure that species can coexist and reduce competition for food.
Irrigation Ditch or Pond Systems for Raising Fish
Fish farmers should have a ditch or a pound to hold water. Such system is unique because at a small level, waste produced from the fish is then used to fertilizer farmers’ fields. Many of our customers, who are running aquatic farming business, own organic fertilizer production line at the same time, as fish waste, mixing with agriculture waste and other organic materials, could be granulated into granular organic fertilizers for sell. We call it “Recycle Economy”. On a larger scale, mostly in ponds, the pond is self-sustaining as it grows plants and algae for fish food.

With the development of personnel fish farms in Indonesian, commercial fish meal sector has been more and more prosperous. To improve the quantity and quality of its exports and to remain competitive in regional trade, it is essential and urgent to modernize fish meal equipment and adapt production techniques. Choosing of fish meals should be in accordance with the different kinds of fishes:
for sinking feeds are sturgeons, ayu, flatfish, rock fish, and red fish;
for powder feeds are eel, turtle and sea fish;
for particle feeds are prawn, tilapia, crab, grass carp and abalone.
Sustainable Development of the Fishery in Indonesia
With the development of Indonesian Fisheries, environmental protect becomes more and more important. Climate change, unsustainable fishing practices, pollution, mining discharges and poor watershed management all threaten the long-term viability of Indonesia’s marine resources. Indonesian government educates and supports coastal fishing communities in developing local management of sustainable fishery to protect the marine and other coastal resources on which they depend for their livelihoods. Fish farms should limit their impacts on the environment from the effects of water pollution, the use of chemicals and antibiotics, and escapes of farmed fish. An estimated 95% of Indonesia’s fisheries production of more than 8 million tonnes a year is produced by artisanal fishermen, which has encouraged the government to support efforts to enable coastal communities take greater responsibility in managing their local fisheries resources in a sustainable manner.
Promoting sustainable fishery includes educating fishermen about the impact of different fishing methods. According to marine surveys, almost two thirds of Indonesia’s coral reefs are considered threatened from over-fishing while almost half of the nation’s reefs are considered threatened by destructive fishing practices, including the use of dynamite.
Achieving fishery sustainability in Indonesia will be difficult, but if a successful strategy can be devised the impact could be enormous as it could provide a template for other developing countries that suffer from the same institutional disadvantages that plague Indonesia.